Today was always going to be an interesting one with Georgie flying home and myself being alone for the first time this trip. After taking the morning to enjoy the last of her company after a month and wondering what I was going to do once left in solitude, the time eventually came to drop her off at the airport. With it only being a ten mile trip we didn’t need much time to get to the terminal and as we went to get on the motorway I sat smiling that Fanny hadn’t let me down and had got us through over 3000 trouble free miles. It was at that moment that all power went from the engine and we crawled to a stop on the side of a merging motorway lane. Checking all the usual trouble points to no avail, and having no joy with taxi companies, we walked back up the road to a petrol station and began asking around for a lift.

No one seemed too interested in diverging from their daily routine in order to help Georgie get her flight, I even got halfway through asking the attendant herself if she wouldn’t mind popping off duty to help out whilst I took care of shell’s shop when Georgie interrupted with the good news that she had sorted it. Somehow she managed to persuade a bus driver to get her to the airport in his off duty, empty bus, securing herself a whole, private bus to catch her flight in time. Turned out he has a Campervan like mine sitting at home. 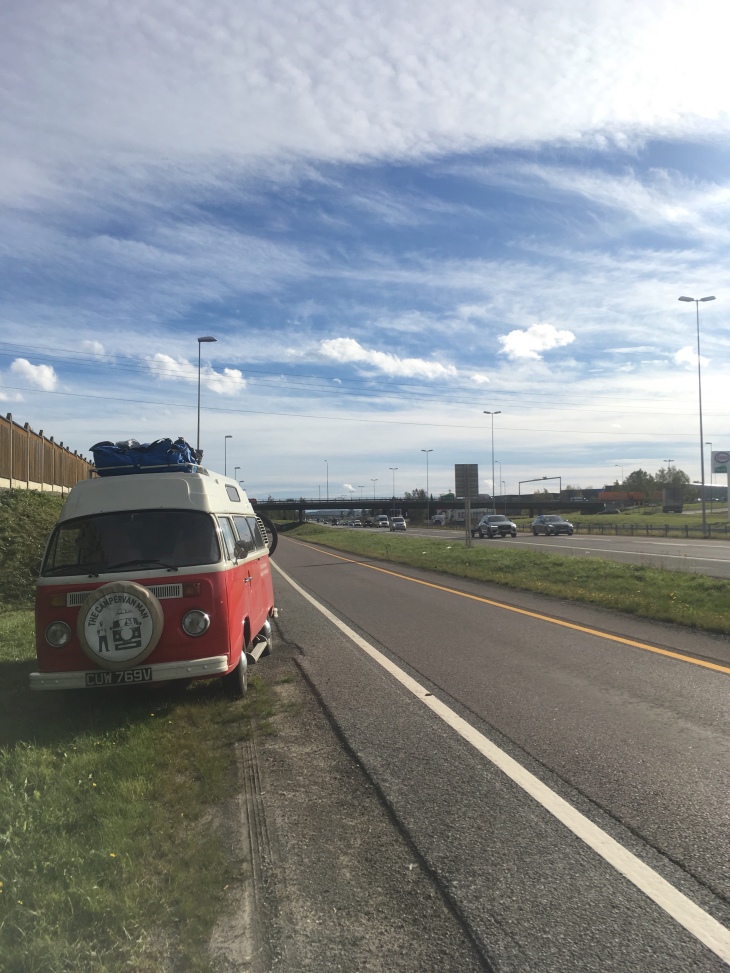 With the serious issue taken care of I was left on the side of the motorway pondering over what to do about the immobilised old van. With breakdown cover either towing me to an expensive garage like they did in Vienna or sending me all the way home I looked for a new option and looked up nearby mechanics. Apple maps was as useful as ever and sent me to a body repair shop with a nice cycle up the motorway into an industrial estate. This is where I flagged down a police car and asked them for help.

To my horror they proceeded to look up mechanics on Apple maps, asked if it was my red van plonked over the hard shoulder, and then sent me on my way to what I hoped wasn’t another body repair shop.

Inevitably I ended up at another body repair shop who gladly sent me next door where a proper mechanics operated where I began explaining my troubles to the boss whilst asking for help. Fortunately, the owner sympathised with my situation and said he’d help me out. After a short wait I was called outside and after some incomprehensible Norwegian chat I was sandwiched between two bulky, bearded Norwegians in a small van and taken back to my broken vehicle. Squashed in with the gearstick between my legs it wasn’t the most relaxing drive but at least it broke the ice with the Vikings. This certainly wasn’t how I expected to start my solo travel.

After quickly looking over the engine, pulling at various wires, trying start it a few times and poking about they soon established that it was a miserable situation with no spark and I that needed a new coil to get me going, and left me as they went to look for one.

Once again abandoned on the side of the motorway I just stood staring at the van figuring out what to do. If a new coil could be found all would be well, if not the van would get taken away on a long journey home and I’d be stuck in Norway. This opened up new possibilities and within five minutes I’d already looked up a flight to Helsinki with a plan of catching buses through the Baltic states before flying home, so either way the adventure would continue but my preference naturally still remained with Fanny.

As I glanced at various routes whilst Indiana Jones flickered on my laptop and a tub of rocky road quickly disappeared I got a knock on the door, something I wasn’t expecting on the side of the motorway until the mechanics came back. The bus driver who rescued Georgie sent his friend to check if I was okay and if I needed help from him. Being a fellow vw, and normal, bus driver he knew the struggles of life on the road and his kind offer was a great gesture, and if the mechanics failed I had a comforting back up plan in place. A recovery vehicle was already on its way to take me to the mechanics workshop but if that failed I took the bus drivers friend’s number so I could get some help.

The recovery truck quickly followed and winched Fanny onto the trailer and took me for a boring sightseeing tour of the pre- airport motorway infrastructure before turning around and dropping me off at the mechanics with a much lighter wallet.

Once again the engine bay was swung open and the mechanics resumed tinkering about. The friendly manager suggested we swap the broken coil with the one from his old 1957 Cadillac engine to confirm that it was the coil that was the antagonistic element and if it worked I could buy it off him instead of waiting for a new part to be delivered. Sure enough the diagnosis was correct and the engine spluttered into life like music to my ears as the van roared again. I was ordered to leave the van on charge and granted permission to stay plugged in at their yard all night, which is where I am writing this from. It’s a nice summary of van life that last week I was stood on top of one of Europe’s most dramatic cliff faces overlooking a fjord and now I am spending the night stuck in a mechanics yard with a hint of American muscle in my engine and large hole in my bank account. That’s just how it goes, you’ve got to take the good with the bad. There will inevitably be setbacks and bad days but that’s what makes the good ones that extra bit special.