It’s a crazy world when your life is your job. When your occupation requires you to be present from your breakfast until you get to the bar after dinner, its hard to find a little time to relax without the watchful eye of almost constant supervision. Sure, ski instructing isn’t the most stressful of jobs- after all it is just helping other people to ski as you enjoy the mountain and then socialising with the guests around the dinner table and at the bar, but a smidgen of time outside this regulation is much appreciated. One of the most common questions I was asked by my guests was ‘don’t get you tired of being at the bar every night’ or ‘do you get to spend much time at your lodge’, to which the response was always a modest ‘of course’ followed by ‘I only really go there to sleep’. However, what goes on back at the staff lodge is a whole different story. You see, when you combine a group of ski instructors with a bar where they can access free alcohol, as long as they bring their guests, and then release them from an exceedingly controlled environment, they’re not just going to go to bed quietly every night, that’s not how it works. Whether it’s the element of escapism from a micromanaged setting stimulating the need to let loose or simply just the resulting intoxication from the occupational hazard of the bar’s party atmosphere, what goes on behind closed doors is most certainly not just rest.

An important piece of information for this post is the awareness of one of the universe’s most divine creations- it comes in a sleek can and a variety of tantalizing flavours, it’s price is almost as delicious as it’s taste and it’s a two-drink journey to a goodtime- and its name is Strong Zero. Referred to affectionately as a strong, this blissful beverage has acted as the catalyst for many a legendary lodge party, and the cause of many an entertaining event. After an evening spent at the bar it only takes one or two of these majestically created cans to keep the party going, and with a variety of international drinking games and rules these lodge parties were fantastic. In the same way different drinks produce different intoxicated outcomes, strong zeros bring about different results. I for one am a dancing drunk, before moving onto a more vegetative state, losing control of my arms first before my legs slowly tire out. Consequently, I may endure the odd tumble in the latter stages of strong zero induced intoxication, seriously affecting my ability to dance, and stand. Others react differently to this potion, for example, some people become very affectionate whilst others just get very sleepy. Some people assume the role of the enforcer and encourage the consumption of more of the drink through a variety of rules and chants. A rare case of rambling can also be the result of overindulgence in strongs, often causing particular people to wander the corridors searching for a drinking partner late at night or instigating them to forget which room theirs is. In an extreme case one instructor in a state of utter intemperance forgot which floor he was on and instead of entering his own room, stumbled into the bedroom of an elderly Slovenian gentleman who was peacefully enjoying his slumber. Unaware, he proceeded to jump into what he thought was his own bed, landing on a startled and bemused pensioner, lying face to face before realising his drastic error and rapidly making an escape. To be violently woken up to be led face to face with an inebriated, hairy, equally confused man on top of you must be quite a scarring experience, which will most likely require a few strong zeros to recover from. 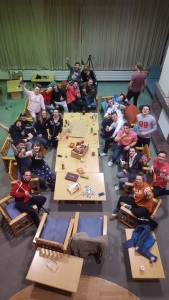 Fortunately, this alcoholic aftermath was just a one off and the more regular reactions proceeded were considerably less aggravating for any sleeping Slovenians. When the party was finally ushered out of the common room for noise control reasons, it would often continue down in the dorm rooms. The more compact area regularly led to crazier celebrations consisting of people jumping on beds, dancing on beds and falling off beds. Flares were lit out of windows and bottles of sake were demolished, phones were used as strobe lights as full on raves occurred into the early hours of the morning. Many an amazing memory were made and lost in these situations, but they remain an important part of social life on a season and the lodge shenanigans were some of the bet parts of the season, but as I said- I only go there to sleep.