After a facetime call to my family and friends who were on holiday in Portugal I, surprisingly, began to miss them. On the drive down to Rome me and Bani joked about catching a plane and surprising them on the beaches of the Algarve. Under the horses of the Altare della Patria we went ahead and booked a flight to the south of Portugal for the following morning, leaving us the rest of the day explore Rome. Rumour has it that Rome wasn’t built in a day but that is all we had to delve into the vast amount of ancient wonders and magnificent buildings on offer. From the grand monument where we had booked our tickets we headed onto the big daddy of Roman architecture- the Colosseum. It’s huge.  The Pantheon and the Trevi fountain were also impressive, more impressive than Bani’s tour guiding ability, as he tried to remember things from his year 9 school trip to the city. But really it was just crossing things of the list as we counted down til our flight. 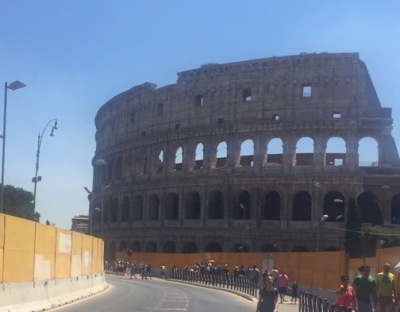 After dropping off the van at transfer service, we slept in the airport until it was time to board our flight to Munich. Munich? Yes, Munich as we had to take a slight diversion to get our transfer to Portugal. When we eventually got to the right country, and eventually the right beach my Dad was eagerly waiting at the end of the footpath. As he was the only person we told of our plan we went full James Bond mode and crept up the beach to the rest of my family, excitedly sneaking up on them. In my mind it would play out as my mum being extremely excited to see me. In reality, as I laid down next to her on the sand and she turned around and saw me I thought I had given her a heart attack. She just did not react for a couple of minutes and just stared, silently in astonishment that her son wasn’t in in Italy but was led right next to her. Then she started crying. And she kept crying. And then she finally seemed relatively stable and managed a quick hug and a smile. My brother and his girlfriend were even more confused as they didn’t see me, but only Bani who sat next to them, leaving them completely bewildered that he had left me and joined the family holiday. Finally, when they all calmed down we had very excited, boozy lunch as everyone came to terms with our surprise arrival. 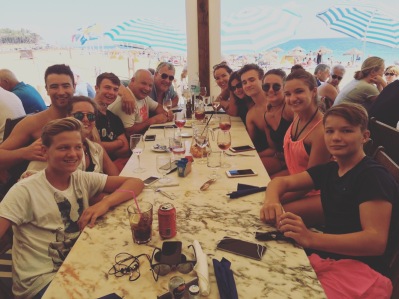 We spent a few days getting pampered. Sleeping in a bed rather than sharing a 4ft wide van, eating at nice restaurants rather than living off cereal bars and pasta and my dad buying the beers rather than whatever cheap drinks we could find wherever we were, it certainly was a holiday, inside a holiday. I have been to that villa every year since I can remember and I’m certainly glad I didn’t break tradition. Eating donuts on the beach, playing cricket and enjoying the fine produce of one dad’s bbqs are what our holidays are all about. This is the first time Bani had manged to wriggle his way onto one and he certainly entertained. Whether it was losing his sunglasses off a pedalo or experiencing an old heavyweight’s judo flips, courtesy of my dad, and being left crippled on the beach, he definitely fit in. It took my mum a few days to accept I was really there so when it was time to leave she wasn’t as emotional as when I left home a month before. Lily, one of my greatest friends, and prinssoulmate, was a bit harder to shake as she unfortunately wasn’t allowed to join us on our flight back to Rome.