After an amazing few days in Lake Bled it was finally time to depart the laid-back adventure hub and head to the antithetical culture of Pag, a Croatian party island in the Adriatic. The contrast between the chilled lake town and the festive shores was bound to be an interesting one, but one we were looking forward to, especially as it meant returning to the glorious Slovenian roads. After a few hours cruising down the highway the border approached and the main road dwindled into small village lanes which were perfect for the van. A notion shared by a motor biker who followed us for a few miles before riding alongside us to signal his appreciation for the van before speeding off over the horizon, leaving Bani blushing in his wake. We left the outstanding rural roads and re-joined the highway before, strangely, the first border control of the trip. We passed through almost seamlessly other than the understandably intrigued enquiries from the border force who were dealing with a pair of eighteen year olds in a forty-year-old VW van over 1000 miles from home. Eventually, I hit a wall, due to the long haul driving and previous day’s excitement of the skydive, and being the responsible adults we are decided to pull in for the night in a lay by right on the coast. 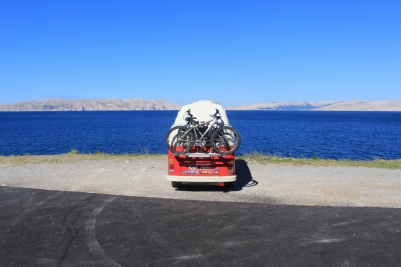 The proximity of the van to the coast became even more apparent the next morning as the sunrise revealed the waves crashing just a few feet in front of us at the bottom of the small drop we had parked on top of. We had parked right on the coast. We took this opportunity to test out the Croatian waters and have a wash, which according to the faces of the bewildered onlookers was quite an odd thing to do. The sight of Urchins struck enough fear into us to swiftly exit the waters not wanting a repeat of our misadventures in Kavos where their painful needles found a new home in both our feet, leading to a Doctor tweezing them out at 7am. Echinoderm free we continued our journey to the ferry port only to be greeted by a hideously long snake of traffic lining the hill waiting for one of the two boats to ship us to our destination. When a country possesses 1244 islands you would expect a slightly more competent ferry service, especially during the peak tourist season but instead we were faced with a few hours of inching closer to the crossing provision, circling the routine of braking, turning the engine off, back on again and moving a few feet then pulling the handbrake back on. Unfortunately, there was one scenario where this vital chain was broken causing a bit of a calamity within the van. As we rolled slowly down the hill the engine was a bit slow to turn on and the brakes were locked out and with no handbrake we were heading right up the back of the car in front. Whilst Bani let out a little scream I was frantically turning the key, trying to find a gear and pressing the brakes. We remain unsettled on what brought us to a halt. The sudden stoppage and bang suggested to Bani that it was the spare wheel bumping the boot in front that ceased us from carrying on whilst I standby just getting the brakes going in time and slamming them on just short of the car. A claim supported by the lack of any marks on either vehicle and the non-existent reaction from the driver. There was one amazing thing the Croatian ferries did have going for them, the use of the Hvar crossing free for life if you were unlucky enough to be born on it. Although it seemed a baby could be conceived, developed and delivered in the time it took from joining the queue to boarding the boat we finally arrived at the front of the glacial line, and a comparatively short time later, in Pag.

Pag itself was a nice island but nothing special, possessing the beautiful beaches and small towns you would find on most of the island, or in Game of Thrones which is partly filmed further down the coast. There was one particular corner of the island which is why we ventured down to Croatia though, where the beach is a festival all summer long, lined with clubs and bars, fairground rides and stages. The party town is a wonderfully weird place lying somewhere between the atmosphere of a music festival and the rowdy strip of Kavos. We spent three nights investigating the open aired clubs, taking advantage of the cheap supermarket spirits and free entry to get the proper party experience, interspersed with three days of recovering on the beach where we had found the optimal parking spot. The van was left right on the shore of the pebble beach only a few hundred metres across from the main hub at the wakeboarding centre which provided us with some entertainment. However, not moving the van in three days whilst rinsing the batteries for light and the charging of various appliances left us in in a bit of a pickle as we tried to leave. All packed up and ready to move on we turned the key in the ignition to the horrible sound of unending wurring and the fate of dead batteries. Unable to push the van up the slight pebble slope we began the hunt for help along the beach. It wasn’t long before we found the best help we could have hoped for- Germans. Providing a set of jump leads and a working engine, alongside their famous efficiency and know-how they hooked up and got to work. It wasn’t long before the 2.0L engine was purring again and the van was back to life, departing the beach to the harrowing sound of ‘I hope you’re heading back to England’

To the dismay of our German heroes we weren’t heading back home, but even further East to Budapest via Zagreb. The Croatian capital was a disappointing stop over to say the least. Ugly to look at, nothing much to do and walls slandered in far-right wing graffiti with torrential rain to compound the misery of an old communist state. We didn’t think it was worth the soaking to have a look around the few interesting spots around the town and decided to move on. This is where it got worse and spawned by potentially bias view of Zagreb. Pulling out of the toll booth major problems began to occur as the transmission began to die, failing to select any gears. Much to my annoyance and the queue of angry, beeping Croatians behind, we couldn’t move out of the gate until third gear finally popped into place and we crawled into the layby. Once we had found the gears the others seemed to slot in faultlessly but it wasn’t a good sign going forward with 2000 miles to go. Maybe the Germans were right after all and we should’ve headed towards home as it did get worse, much worse.